Hot Shot Kid seeks 15th local victory. Canterbury Park’s 10-race Wednesday program, named Made In Minnesota Day, includes five Minnesota-bred thoroughbred stakes races offering $350,000 in purses. The Minnesota Oaks and Minnesota Derby, each at 1 mile and 70 yards and each with $100,000 purses, are the headliners as the seventh and eight races respectively. […] The freight train was approaching, in fact keen observers knew it had been for years; it was only a matter of when it would arrive. That train is Mac Robertson and the station the historical trainer win total at Canterbury Park and Downs. A couple of weeks back Robertson overtook Canterbury Park Hall of Fame […] BY JIM WELLS A frequent patron of the races stuck his head outside the front door early Saturday to encounter a heavy rain. “Well,” he responded, “Canterbury Park must have something big planned today.” There has been no better forecast of the weather this spring/summer than the schedule at the Shakopee racetrack. If a big […] 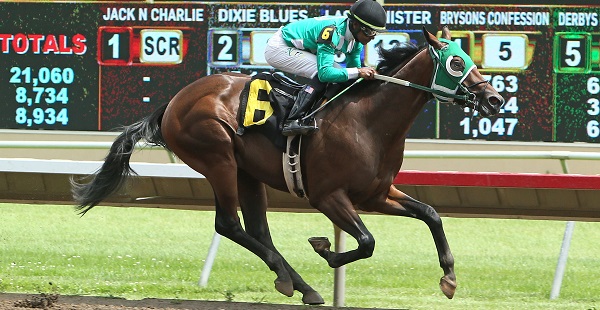 Minnesota-bred 3-year-old Mr. Jagermeister continues to train at Turf Paradise as trainer Valorie Lund determines the next race for the 2017 Northern Lights Futurity winner. “There’s not a lot for us unless we want to go in derbys or (Kentucky) Derby preps, which we don’t,” she said.  The plan is to “keep him sprinting for […] Canterbury Park’s richest race of the season, the $200,000 Mystic Lake Derby, will be run Saturday evening as the fourth race on a nine- race program that begins at 6:00 p.m. Eleven 3-year-olds were entered for the one-mile turf race. Giant Payday, the 7 to 2 morning line favorite, will start from post position nine […]