American Quarter Horse racing continues to be an important component of the Canterbury Park racing season. The 2020 mixed-meet format will offer more than 100 races offered exclusively for America’s fastest athlete, the quarter horse. Total purses should near $1.8 million. While the first quarter horse condition book won’t be available until mid-May, owners and […] Esqueda Returns To Canterbury With A Rush BY JIM WELLS There is the front or back nine on a golf course, there is ninefold to express a given quantity times, yes, nine; there is a starting lineup consisting of nine in baseball and there is a ninepin bowling designation. The number applies with equal significance to the number of horses sired by […] By Rebecca Roush With 21 wins this season, trainer Jason Olmsted certainly knows his way to the winner’s circle. This will be his fourth straight champion quarter horse training title at Canterbury Park. The Olmstead barn is currently filled with 45 horses, but with the quarter horse portion of the meet concluding soon the 39-year-old […] By Rebecca Roush Growing up on a five-acre hobby farm in Maple Grove, racehorse owner Tom Pouliot had always been around the sport. His parents owned racehorses and others that he would barrel race. They started out racing the horses at “small bush tracks,” at the Anoka County Fairgrounds, and in Lake Elmo and Wadena, […]

Scheckel Knows How To Make A Shekel BY JIM WELLS One of his trainers sizes it up simply as a numbers game. Or in metaphorical terms, if you shoot a lot of bullets you’re apt to hit the bulls-eye sometimes. There is more to the analysis than that, however, because Thomas J. Scheckel has been a horseman for as long as he […]

Cristian Esqueda Leads The Way On The Qs By Rebecca Roush Leading quarter horse rider at Canterbury Park, Cristian Esqueda, grew up watching his father ride and train the Q’s.  “I felt like I had big shoes to fill,” he said. At just 10-years-old Esqueda moved to Ohio with his family from Aguascalientes City, Mexico. Around the age of 13 Esqueda took a […] 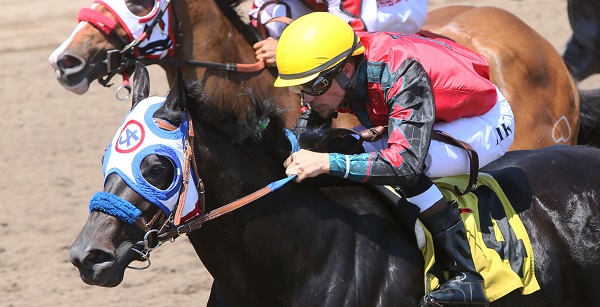 By Katie Merritt Trainer Randy Weidner now calls Ocala, Florida home, but he was raised in Northfield, Minnesota, only about 45 minutes from Canterbury Park. Growing up in a family that always had a foot in the equine industry, be it with barrel racers or backyard show horses, Weidner grew up riding and working with […]