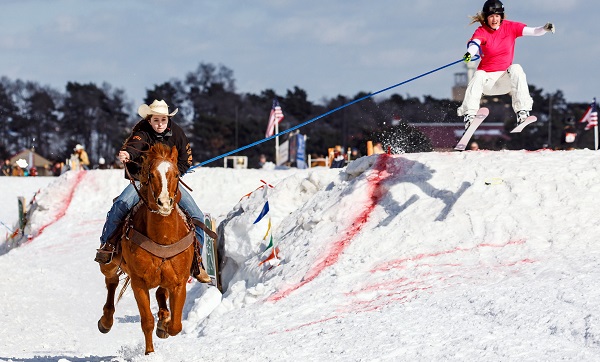 Horse racing in the snow, with a twist, is back at Canterbury Park this Saturday. A horse, most often a quarter horse, and a rider in a stock saddle, run down the stretch pulling a skier through a demanding course complete with gates and jumps as they compete against the clock and another team to qualify for the finals. More than 200 teams, with competitors from around the country, have registered for Saturday’s event.

The action begins at 1 p.m. Now in its third winter at the Shakopee racetrack, a popular freestyle show is also featured prominently. Skiers and snowboarders, again pulled by a horse, launch off a 15-foot snow ramp across a 20-foot gap performing tricks and flips. Cowgirls, cowboys, punks, speed geeks, and weekend thrill seekers will compete for cash, glory and prizes with a forecast in the 30s and sunshine making the outdoor stadium seating a perfect vantage point to take in the action. Indoor reserved seating is also available. Advance tickets can be purchased online or day-of purchases can be made at the gate for $10 for admission. Kids 12 and younger are admitted free.

Translating to “ski driving” in Norwegian, skijoring was first reported in the mountains of Central Asia thousands of years ago. While not an Olympic sport yet, skijoring was a demonstration sport in the 1928 Winter Olympics. It gained popularity in North America in the 1940s, and today is a competitive worldwide sport. CJ Walsh, 12, will be among the youth competitors when Extreme Horse Skijoring comes to Canterbury Park on Saturday, Feb. 23.

How does he think he and his teammate, Ava Erickson, will do?

“I’m guessing we’ll have more fun than success,” he said.

Skijoring is an adrenaline-packed race that involves a skier being pulled behind a horse. Competitors maneuver through gates and other obstacles in this unique winter sport.

Tickets for the event, presented by Windsor, are on sale now.

CJ, whose sister previously participated in a skijoring event, will be riding the horse while Ava will be pulled by rope on her skis. Once she was asked about participating in the Extreme Horse Skijoring event, Ava looked up videos online to get a sense of what the sport is all about.

“I thought it was really cool to see people going at top speed, going over jumps and doing all this cool stuff,” she said.

Though she will be skiing during the Extreme Horse Skijoring event at Canterbury Park, Ava is comfortable around horses, competing in Minnesota Junior High Rodeo and other horse shows. Plus, she said, “I don’t know if CJ can ski.”

CJ, meanwhile, will be riding Spark, his 17-year-old quarter horse.

“I don’t think Spark has ever pulled a human before, so I don’t know how she’ll react,” he said.

As of mid-January, the two had yet to practice together, though Ava had once at her grandparents’ place. It was difficult, she said.

“It’s hard going around dodging stuff and not being pulled over sometimes,” said Ava, who considers herself a strong skier.

CJ’s horsemanship experience includes 4H, the Western Saddle Clubs Association and the Little Britches Rodeo. He expects the time between now and the Feb. 23 event to pass quickly.

Is Ava nervous about competing in Extreme Horse Skijoring? “Yes,” she said with a laugh.

Still, she’s excited about the experience.

“I’m really looking forward to doing this. It’s something really fun that I want to do,” Ava said.

Ava, who lives in Lake Elmo and attends Stillwater Middle School, also plays tennis. Her favorite subject in school is science, and she hopes for a career in chemistry or biology when she grows up.

CJ lives in Stillwater and also attends Stillwater Middle School. He participates in shooting sports (air rifle and bow), and also trains dogs. His favorite subjects in school are math and science and he’s looking toward a career in agricultural science when he gets older.

People can watch both CJ and Ava compete at Extreme Horse Skijoring from 1-4 p.m. Saturday, Feb. 23. Tickets cost $10; children 12 and younger get in free.

In addition to the excitement of horses pulling skiers during Extreme Horse Skijoring at Canterbury Park on Saturday, Feb. 17, there will be plenty of other spectacles.

One of which is fire dancing. Aaron Hurley, Katy Clark, Lilly Gernster and Lewis Kelly will be performing Fire Dancing.

We spoke with Eilysha Sklar, owner of Eilysha Sklar Performing Arts, about fire dancing and what guests can expect.

Canterbury Park: What is fire dancing?

Eilysha Sklar: Fire dancing is essentially dancing with fire using a variety of props and styles.

It is a combination of various performing arts or skills that involves the manipulation of fire. The props refer to the fire instruments used in the performance, such as poi, staff, hoops, juggling, etc. Each performer has a different skills they bring to the table and their own personal style of how they perform with said instrument.

CP: How did you get into it?

ES: Each performer has a different story of how they got involved. At one point or another, they saw someone performing and said, “Hey, I want to do that too!”

There are various events that have workshops that help teach performers the skills and safety techniques; such as CampFire, an event all the performers for this show are involved with. It is a Fire and Flow Arts Retreat that takes place in Minnesota in July. You can find more information about CampFire online.

CP: Does performing during winter make any difference?

ES: There are various factors that can make fire spinning in the winter difficult — the below freezing temperatures can have negative effects on some of our props like hoops and fans, which are made out of polypropylene and metal. Both are susceptible to bending or breaking in cold weather if misused.

As for ourselves, like any job we take the proper precautions and dress for the weather and layer up when needed, the recommended fabrics to wear while spinning are natural fibers, so cotton, leather, denim, wool, silk, etc.

CP: What can people expect on Saturday?

ES: People can expect to see a wonderful show this Saturday. Our sole purpose is to entertain the crowd and it will be nothing short of that.

We are gonna be using multiple different props and mediums to showcase our skills in a fun, family-friendly environment.

ES: I think all of our performers can agree that our favorite part of performing is looking up when we’re spinning to see the looks and smiles on the crowds’ faces.

It is such a great feeling to know you inspired someone and made their day just a little bit better by sharing a part of your passion with them.

ES: We are thrilled to be performing for this event for Canterbury.

We are looking forward to this show and hope to perform at more in the future! For more information about our services offered or booking information, check us out online.

Not so, says Ted Slathar, president of Extreme Events MN.

“Oh, they come out of the woodwork for this stuff,” he said. “I just had to put the word out.”

Extreme Horse Skijoring–coming to Canterbury Park on Saturday, Feb. 17–is an adrenaline-fueled sport that involves a skier being pulled behind a horse.

Translating to “ski driving” in Norwegian, skijoring was first reported in the mountains of Central Asia thousands of years ago, according to Skijor International. It gained popularity in North America in the 1940s, and today is a competitive worldwide sport.

At Canterbury Park in February, skiers and snowboarders will have to navigate jumps, obstacles and gates, all while using their arms to collect rings positioned throughout the course.

Skiers can reach speeds of 40 mph.

Below is a video of skijoring from Leadville, Colo.

He said he had seen skijoring at resorts out West, and had the idea to bring the sport to Zumbrota, Minn., last year.

“Minnesota hadn’t ever had an event like this,” said Slathar, whose company also specializes in bull riding and rodeo-style events.

There will be four groups of competitors at Canterbury Park on Feb. 17:

Each group will include 20-30 teams, and 10 from each round will move on to the finals, Slathar said. Meanwhile, there will also be a quasi-halftime show, with freestyle jumps and aerials from the athletes.

People mostly enter as teams, but Slathar said he expects there to be more solo skiers than horse riders.

Looking to compete for cash and prizes? Or interested in becoming a sponsor or a vendor?

The Feb. 17 event at Canterbury Park will also feature family-friendly festivities, including stations for kids inside and outside, as well as other spectacles and things to do.

“It should be a lot of fun,” Slathar said.